Mrs Frog is clearly not keen on good byes as she chose not to join me in the shower this morning. As a team we got together for a photo by a large baobab tree and then it was off for the next leg of our adventure. The first point of call was for fuel. There is a fuel shortage in Zimbabwe and the first garage was without diesel. Our driver made a few calls and made arrangements. At next petrol station the bus was topped up with diesel and despite the ban on filling up jerry cans a small financial gesture to the attendant and the can of diesel we were carrying was also topped up and we were on our way. This is not the first time a back-hander has been paid and it won’t be the last.

Lesson No.16: Paying a bride is part of the way of life.

The road is long and mostly straight. We have a couple of hours traveling through less developed, rural parts of Zimbabwe. The lush vegetation around Victoria Falls gives way to increasingly dusty soil and dryer grasses. As we travel we cross bridges over barren river beds. The rainy season is late this year, it was expected in December and yet in January the waters have not arrived. Our driver tells me the district we pass through is suffering a drought and is receiving help from ‘donors’ such as the Red Cross. Given that not too long ago Zimbabwe was known as ‘The Breadbasket of Africa’ with its exports of wheat, tobacco and corn this is a decidedly sad situation. 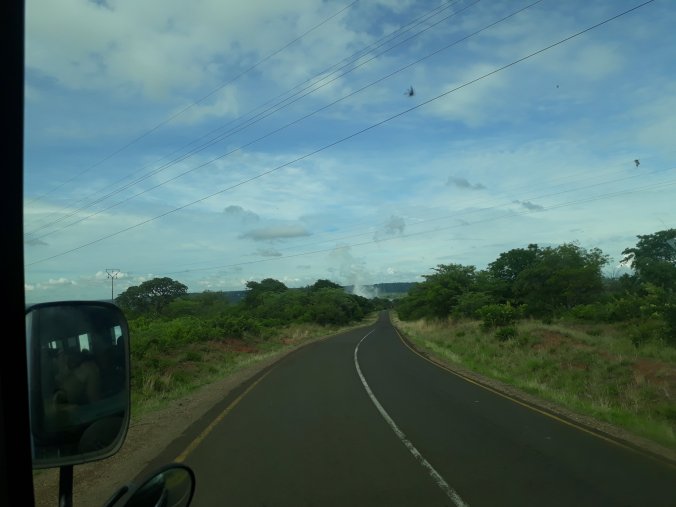 We are slowed in out journey only by the occasional herd of cows or goats crossing the road, a level crossing for the railway or a police check point. Each is a frustration to our driver who thinks the cattle and goats should be kept away from the road because of the risk they cause, the police are supposedly looking for an opportunity to get a little financial gain (though apparently this has improved since Mugabe’s demise), yet they are all interesting to an inquisitive tourist. We pass villages with the traditional rondovals made of a wooden frame, mud walls and a thatched roof. There are occasionally groups of men sat beneath a tree, keeping out of the sun at the side of the road. Women are seen tilling and hoeing the dry land, under the intense sun. Sporadically there are stalls by the side of the road selling bottles of water and Fanta from a cool box or fruit and bags of mopane worms and other interesting items. 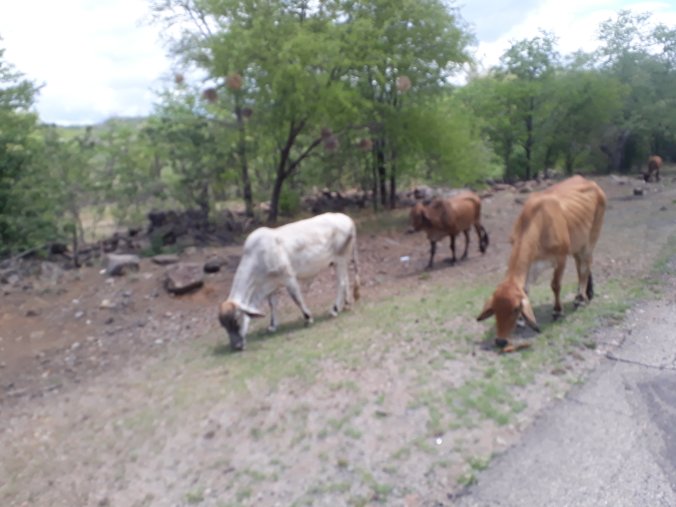 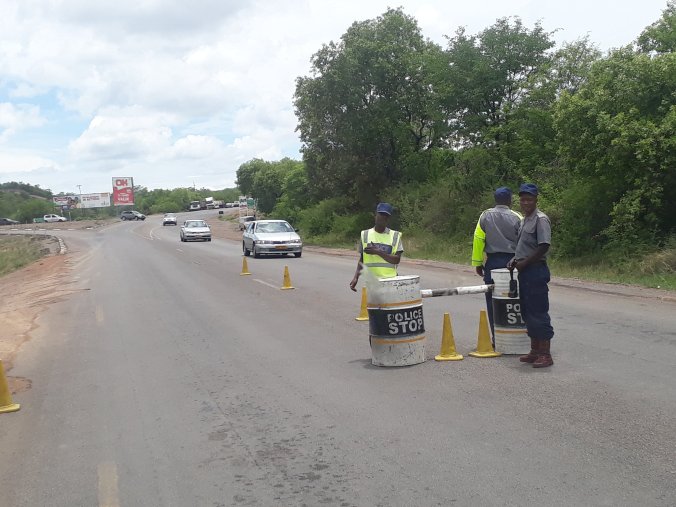 There is little traffic but large trucks rumble along, carrying resources such as copper from the Democratic Republic of the Congo (DRC) through to South Africa and returning with other goods and resources so no journey is wasted. We pass more Chinese development as well as a coal mine and a power station. Our driver does not have a high opinion of the Chinese development. Apparently it is built quickly and the quality is poor. Working for a Chinese company means long shifts, all day or night, with few if any breaks. Our driver reflects that the white farmers were chased out but asks what did it achieve? There are fuel shortages and drugs shortages. The economy is in crisis, 80-90% of Zimbabweans are unemployed. The veterans of independence led the march against the white farmers and the subsequent land reforms but our driver points out the farms stopped exporting because no one knew how to manage them when the white farmers left. I read a little more of the book I have with me and Chigumadzi offers a glimmer of hope. She writes that the black farmers have learned how to manage the land some of the homesteads are now beginning to be fruitful even to level of pre land reform production. This is a good sign, but there is clearly a long road ahead.

Lesson No.17: Get away from the tourist areas.

Lesson No.18: Learn from the locals about their views of their country. 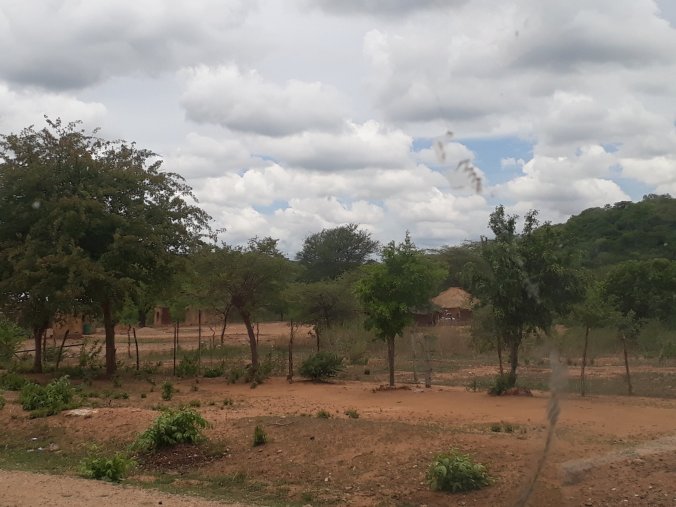 We arrived at Hwange National Park, the largest national park in Zimbabwe. First it was a spot of lunch where I learned that a ‘Spanish Burger’ is apparently a veggie burger and a ‘Mexican Meat Platter’ is rolls of slices ham and slices of burger cheese rolled up and laid on a plate with a few slices of tomato and onion. The latter wasn’t unpleasant but I won’t rush to order it again. However, cherry-plum is a tasty, sugar filled soda. 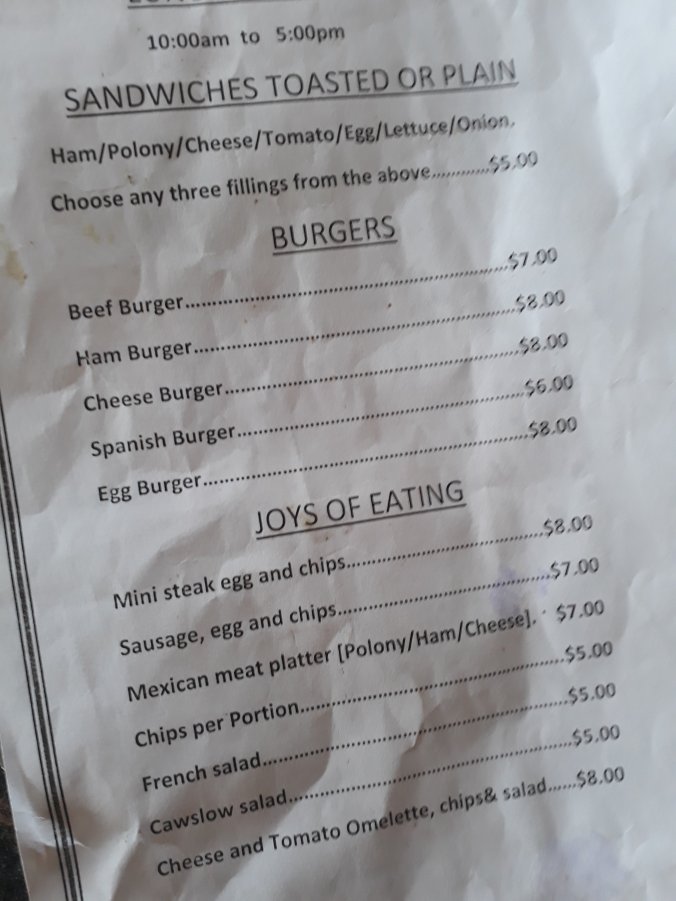 We head out for a safari. We spend a couple of hours driving through the bush looking out for animals. In the course of our time we spot kudu, zebra, hippo, jackal, wildebeest, impala, wart hog, vultures, monkeys, baboons, water bucks, ron antelope, storks and a host of other birds and beasts. The sky was awesome, verging on a storm with darkening clouds giving way to sunlight. The sky seems so much bigger, more alive and wilder here in Zimbabwe. 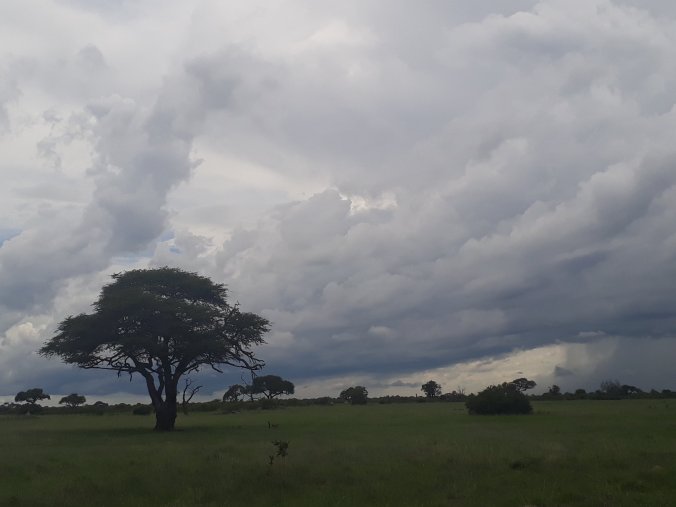 As we finished the safari there was some disappointment that we hadn’t seen any of the so-called big five (elephant, rhino, leopard, buffalo and lion). We boarded our bus and settled in ready for the long drive to Bulawayo. Within moments our driver spotted an elephant that went on to cross the road in front of us, and four giraffe in the distance. Suddenly the mood changed. Excitement spread through the bus. 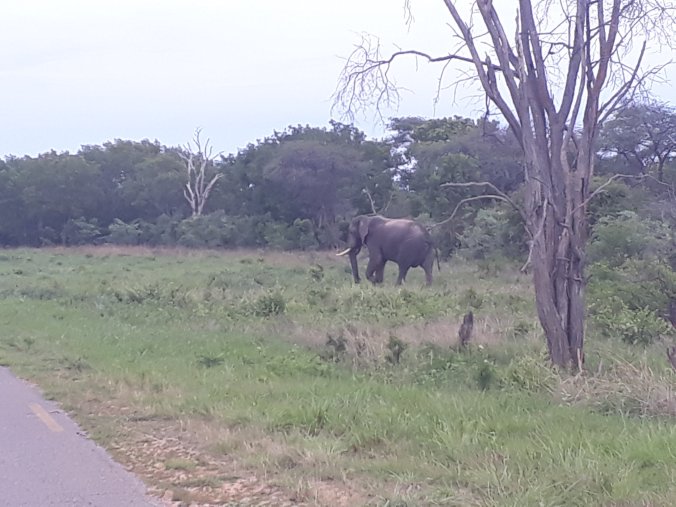 Once the elephant passed we moved on and again, just as we had settled a huge herd of Zebra were spotted beside us. We took a minor detour to get a better view and also discovered a herd of impala on the other side of the bus. When we finally moved on from Hwange we were satisfied and excited, feeling privileged to have had the opportunity to witness these beautiful creatures.

Lesson No. 19: take a safari and prepare to see nothing, but look out for everything. 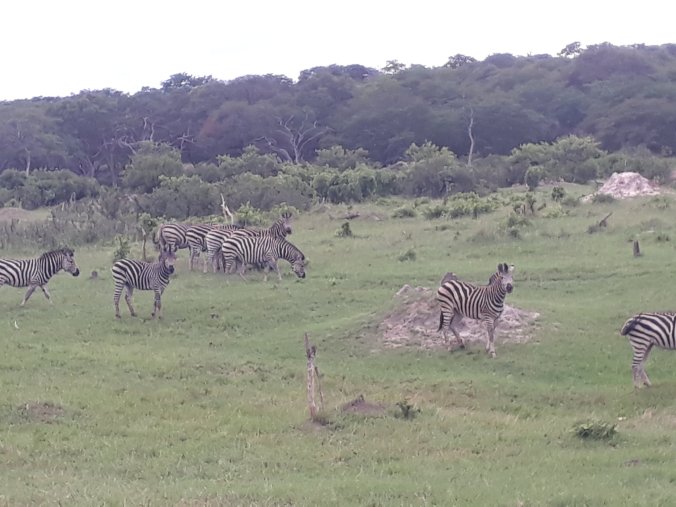 Our journey onwards to Bulawayo was much the same as it was from Victoria Falls to Hwange; cattle, goats and police check points. At one check point our driver was asked to pull over, after a few minutes of having the bus and trailer checked we were off again. The sun set as a lightening storm developed in front of us. The sky was yet again full of awe and beauty.

It was a different experience driving into the city of Bulawayo in the dark. I trusted our driver but it felt like we had a few close calls and I wasn’t sure everything was following the same rules for the roads. However, we arrived at our hotel safely and after a wash and some good got onto the wifi to up date blogs and communicate with friends and family back at home.

Lesson No.20: There is wifi in Africa! 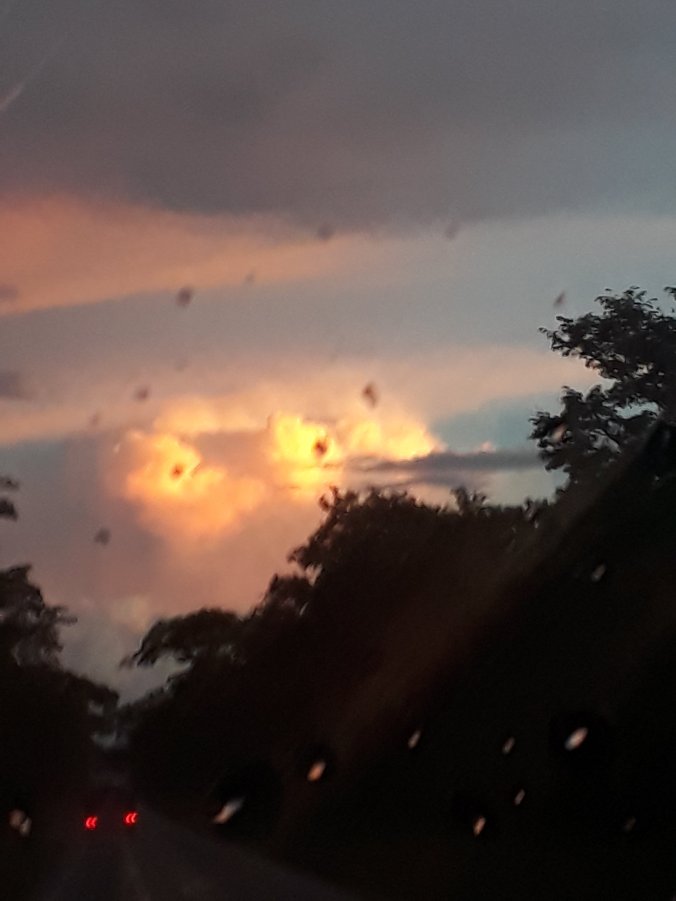